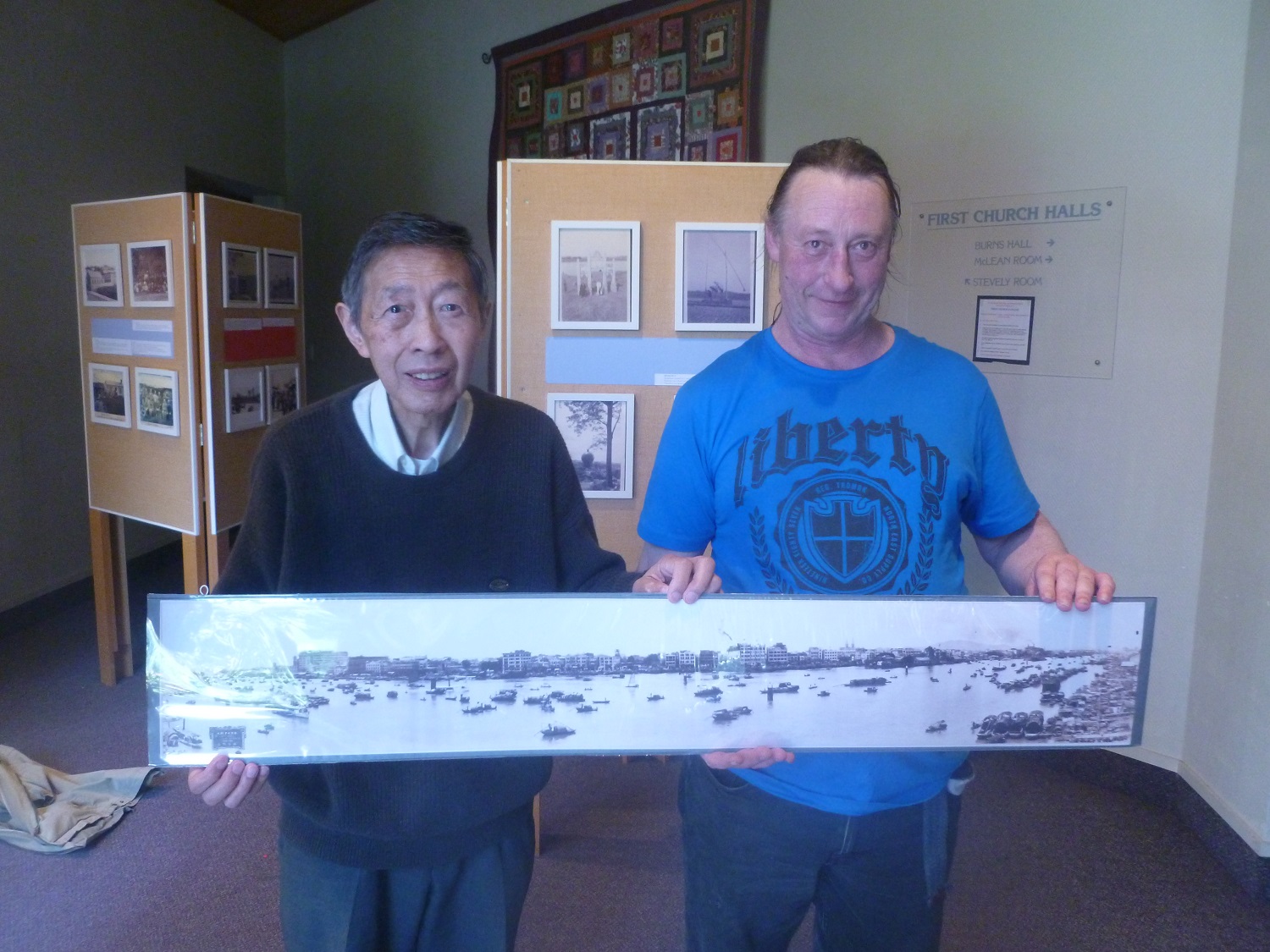 The Canton to Guangzhou via New Zealand photo exhibition set up by Mychael Tymons of Knox College under the banner of the Presbyterian Church supported by the Otago Southland Chinese Association, assisted by Leslie Wong was officially opened on the evening of Monday 5th October at Burns Hall, First Church, Dunedin. A modest gathering of members of OSCA, the Presbyterian Church and the public probably weren’t sure what to expect, but by the end of presentations, there was air of excitement with the realisation that the photo collection and the story behind the collection is something special indeed.

The theme of the exhibition was that Presbyterian missionaries lead by the Reverend Alexander Don had spent time learning Cantonese in Guangzhou before travelling to Otago for missionary work with Chinese miners during the Otago gold rush. Reverend Don took photos of the miners and gave them to Reverend McNeur to take to Canton to help introduce him to the families of the miners. During his presentation, Myke Tymons discussed reasons for the photos being taken, the subjects and the time span. Although the photo collection began at the end of the gold rush, from the 1880s, the bulk of collection contains more than 2000 photos from 1901 to 1951 when all foreigners were requested to leave China. In April of this year, a digital copy of the entire collection was made and taken to Guangzhou by the New Zealand Ambassador in Beijing, John McKinnon during his visit to Guangdong Province. The digital copy collection is currently being kept at the Guangzhou Library. The plan is to hold several exhibitions with different themes to the Guangzhou public in the coming months.

You may ask yourself “What’s so special about these photos?” The answer is that there are very few photos of this period of history in China. As an example, Myke showed me a centenary book from a school in China containing a couple of pictures of students that were sourced from the collection. The school had been unable to find pictures of students in that era from any other source.

Leslie Wong then talked about the adventures of 3 young filmmakers from Guangdong TV who spent a whirlwind 4 days driving around Otago with Leslie, filming at locations in Central Otago and Southland, telling the story of the missionaries and their Chinese congregation. The result was an award winning documentary that was screened after Leslie’s presentation. The documentary absolutely reinforces the notion that the photos are rare and the driver of the project, an American scholar working for Radio Guangdong, George McKibbens holds your attention with his detective work in Guangzhou. Following the screening, there was much excited discussion firstly from Carolyn King author of Por Por’s Cookbook and Peter Chin who suggested that the story needed to be taken further and perhaps TVNZ should be contacted.

You can see for yourself what the excitement was about by seeing the documentary in the Otago Southland Chinese Association website at www.osca.org.nz and clicking on the large “From Canton to Guangzhou” picture on the right of the page.

Thanks to the OSCA committee members – Phil Shum, Linus and Leanne Chin, Frances and Brittany Wong, Regan Young, James Chin and Teresa Chan for organising savouries, cake, tea, coffee and juice. Thanks to the Presbyterian Church for sponsoring the exhibition at Burns Hall.

Thanks to Myke Tymons for setting up the exhibition with assistance from Leslie Wong, Gordon Wong and Matthew Wong.